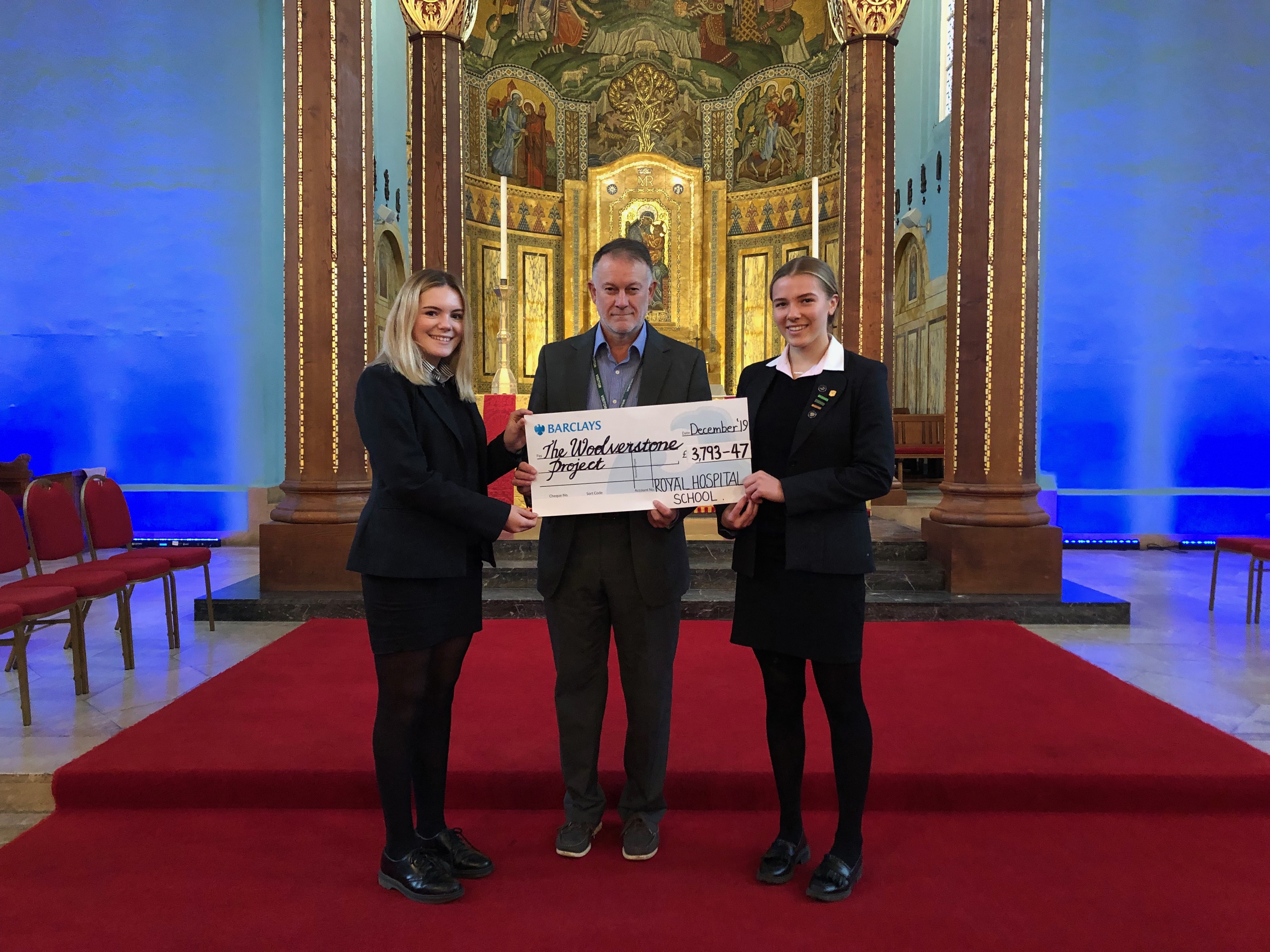 The Royal Hospital School kindly chose the project as one of their charities to support during 2019. The Chair of Trustees was recently invited to chapel at RHS to accept the cheque from the charitable work they have done over the year. The cheque was for for £3793.47 and we would like to thank all at the RHS - staff and students for their incredible support. A summary of the talk which was given to thank them is below:

Some of you may remember that I spoke to you previously in 2018, but I felt it might still be useful to just explain once again the work which we do as a charity.

What is the Woolverstone Project?

The Woolverstone Project is a charity providing sailing for the disabled. We have 27 boats, all specially adapted to allow anyone to sail with us whatever their disability. We operate nearly all year at Alton Water and May 1st September 30th at Woolverstone.

How did this come about?

The Royal Harwich Yacht Club founded the Woolverstone Project in 1993, the year of the Club's 150th Anniversary. The Project was the brainchild of the then Commodore Mrs Margaret Howard. She said:

"There should be an organisation within the Royal Harwich Yacht Club which would provide the facilities to sail for any person with any disability whatsoever, be it physical or sensory."

We started with two boats a Drascombe Longboat and a Challenger trimaran and the project became a charity two years later in 1995. We have grown over the years to a fleet of 27 boats. 2020 is the 25th Anniversary of the Project. We will be running various events to celebrate this:

The money which the school's charity has kindly donated will be put towards replacing one of the original boats we use at Woolverstone. The Hawk 20 we have had there will be replaced with a Sonar the Paralympic sailing class. In fact, we are buying this boat from an ex-RHS pupil Hannah Stodel who represented GBR in three successive Paralympic events.

Who do we offer sailing for?

We offer sailing services to a wide range of individuals and groups, adult learning centres, special schools, NHS mental health services and a range of others including groups like Success After Stroke.

Why is sailing important to them? Well, I talked last time about a sailor called Hilary Lister. Hilary suffered from a rare, progressive neurological disorder that has left her paralysed from the neck down and could only move her head, eyes and mouth. She sailed using a system called sip and puff. This enabled her to operate her boat using three straws. One to operate the steering, one the sails and one the navigation system. Using this she became the first female quadriplegic to sail solo around Britain when she was 37 years old. She sadly died in August 2018.

She summed it up when she said "When you leave the quayside, you leave behind the stresses of everyday life, any sailor will tell you that. If you multiply that sense of freedom a thousand times, that's how I feel. I leave behind my wheelchair, a team of carers and suddenly it's just me. Sailing saved my life."

Sip and puff and other technologies like joy sticks and servo motors have enabled many people to sail. The principle has even been extended to a system which allows a boat to be operated with eye movements using eye gaze tracking glasses allowing someone with cerebral palsy to operate a boat completely independently.

Someone else who has taken sip and puff technology to higher levels is Natasha Lambert. Natasha, working with her father, an electrician, adapted a mini-transat boat to use sip and puff technology to operate the boat. Natasha is unable to use multiple straws, so she uses a single straw with a light-sensitive switch underneath it to switch functions.

Using this technology she has sailed round the Isle of Wight and across the Channel. She has also, using an adapted walker sailed from Inverness to Glasgow and climbed the Cairngorms. She has also sailed from Cowes to London and walked around the perimeter of the City of London.

With her father, she has now converted a Bavaria Nautitech Open 46 catamaran to be operated by sip and puff technology and in 2020 she plans to sail across the Atlantic in the Atlantic Rally for Cruisers.

So sailing can set people free whatever their disability and help unshackle them from the constraints they face in their everyday lives on land. We hope that is what we do a little bit at the Woolverstone Project and the money which the school has generously donated today will help enormously in supporting that work. Thank you very much for your generosity.

Any of you who are coming sailing and would like to see our boats and how they enable disabled sailors to get on the water, do just come over and chat to us.