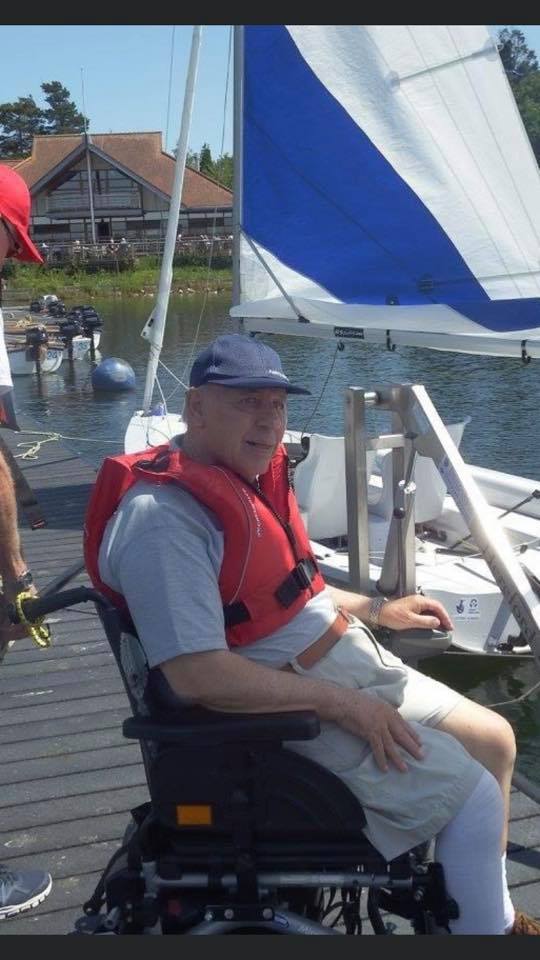 We are very sorry to learn of the death of one of our founder members and one of the first disabled sailors on the books, Ron Hollington. He sailed with the Project back in the late 1990s sailing the Challengers, before any Access dinghies were acquired. He was certainly a character and always determined and spirited. He would set a great example of always rigging his own boat and then towing it with his powered chair.

In his working life he was a professional flat jockey before finishing up as a turkey farmer in Battlesbridge, Essex where he suffered a stroke in the early 1990s which left in a wheelchair.

Ron was also there at the beginning of Hanningfield Sailability when Chris Atkin was setting it up. His support, contacts and assistance were always invaluable and all of us at both sailability clubs will miss him.

Hugh de las Casas (one of our founders) remembers Ron well and has sent us a wonderful little ditty he wrote about him, after a small adventure they had when they went up to London to collect the Project's Queen's Golden Jubilee Award. They apparently followed up this incident with tea at The Ritz.

'Twas a day for Her Maj. to be giving out prizes
To subjects of all different colours and shapes and sizes.
We stood in a room, surrounding a carpet which was Persian
With a pile, handwoven and ludicrously deep-
'Good heavens,' I thought to myself 'you could graze that one with sheep'!
Behind us were Lifeguards, with armour and pikes;
The Queen enthroned opposite, in regality and state.
Me and my mate Ron; him in his wheelchair, somewhat overweight-
As far from The Queen as we could possibly be.
Our names were called out in a military tone-
So I pushed Ron's chair into the deep-pile zone.
Before long, we were stuck, right up to the axle-
I pushed and I heaved with a shove and a wiggle,
The Queen, I could see, was beginning to giggle.
There is nothing, I thought, as I panicked, in the book of protocol, to cover a situation like this.
But a clattering of pikestaffs on oak polished floor
Brought Lifeguards to the rescue an army of four.
They lifted him up, one at each quarter,
And placed him squarely, in front of The Queen,
Now smiling benign as if this was routine.
They stood to attention, as The Queen spoke to Ron;
She waved me away to go chat with The Duke.
And he, with grin and a wink, said to me,
'You won that by a fluke!'